Simon Forster, host of “Large Format Photography Podcast” was so kind as to provide a knowledgeable introduction to this subject:

A wonderful insight into the seldom seen ordinary lives of the Spanish people during an extraordinary period of time. From a compositional viewpoint, Kurt Hielscher’s Unknown Spain, created around 100 years ago, contains images that a modern photographer will relate to immediately, it shows that well composed travel photography is not a modern phenomenon.

Today’s experienced photographer would most likely choose a similar location from which to take a photograph as Hielscher, whether that be on film a modern digital camera or a mobile phone for that matter. Hielscher’s execution of his subject matter is timeless, and a travelling artist may well have taken up the same spot to paint the same scenes.

What ultimately set’s Hielscher’s work apart, are the contemporary details he captured. Again, the type of details that have been captured so well, are the same kind of details that a modern street or documentary photographer might attempt to shoot, but herein there lies a difference, and Unknown Spain captures an innocence and sincerity that is so much harder to achieve in a world full of digitally captured and shared imagery.

Most of the people captured in the book may well have never seen a camera before, and that would have helped him in making something of an occasion when he would set up his tripod and ready his equipment for each photograph. Hielscher clearly had the ability to put people at ease and probably benefitted from the slower pace of life at the time as his subjects would have required some patience with him.

Hielscher’s choice of camera would have been based upon a compromise that has barely changed to this day, although the language has changed rather than the sheer size of the equipment being used. “Serious” photography used large cameras and large film formats, but such cameras were hardly practical for hiking around the Spanish countryside, so something smaller was required. It’s interesting that although smaller film formats were available at the time, Hielscher chose the 6×9 format, which in modern day terms sits somewhere between the modern definitions of medium and large format photography.

I suspect the equipment decision was based upon using the largest film format as practicable for such a journey, as it’s not just the camera that needs to hauled around, there’s also the tripod, film and any other accessories that a photographer does not like to leave at home. To me this shows some intent from the outset to make a serious record of events.

These records are now available for everyone to see.

[Note: There is an internal discussion going on, about exactly which additional camara models beyond the Ideal 9 x 12 large format camera from ICA Dresden were used by Kurt Hielsche on his Spain trip. We will update the webpages accordingly.]

Below is the original foreword of the 1922 Travel Photo Book “Unknown Spain”, by Kurt Hielscher. The English translation of the foreword has been edited by my acquaintance Elizabeth, from Ireland.

Preview of the original book foreword: 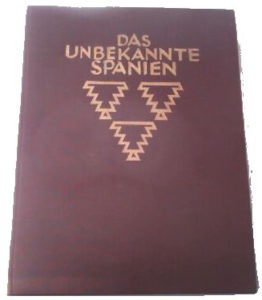 Spain is one great open-air museum …

Fate was kind enough to allow me to spend five years in Spain. Caught there by the war while engaged in studies, I was cut off from home. I made use of my involuntary stay to become acquainted with the country in its furthermost corners. I roamed to and fro, from the pinnacles of the Pyrenees to the shores of Tarifa, from the palm forest of Elche to the forgotten Hurdes inhabitants of Estremadura.

On all my lonely wanderings, I was accompanied by my faithful camera. We covered over 45,000 kilometers together in Spain. We kept our eyes open diligently. I say “we”, for in addition to my own eyes was a precious glass eye in the shape of the Zeiss lens. Whereas mine made me the intellectual recipient of what we saw, that of my travelling companion made it a pictorial permanency. I took over 2,000 photographs during our peregrinations. This volume presents only a small selection. It was not easy to make the final choices. Many a picture, to which I was attached, had to be omitted either for its peculiarity or its character.

In this volume I send forth my sun harvest. May it cast its light on the hearts of many! May it tell of my love of Spain, and of my heartfelt thanks to her chivalrous people for all their kind hospitality!

This website uses cookies to improve your experience while you navigate through the website. Out of these, the cookies that are categorized as necessary are stored on your browser as they are essential for the working of basic functionalities of the website. We also use third-party cookies that help us analyze and understand how you use this website. These cookies will be stored in your browser only with your consent. You also have the option to opt-out of these cookies. But opting out of some of these cookies may affect your browsing experience.
Necessary Always Enabled
Necessary cookies are absolutely essential for the website to function properly. This category only includes cookies that ensures basic functionalities and security features of the website. These cookies do not store any personal information.
Non-necessary
Any cookies that may not be particularly necessary for the website to function and is used specifically to collect user personal data via analytics, ads, other embedded contents are termed as non-necessary cookies. It is mandatory to procure user consent prior to running these cookies on your website.
SAVE & ACCEPT